NOT FOR THE EASILY OFFENDED

The last 40% of this book is pure violence which surprised me, a huge portion of the book revolves around sex, the book opens about money and finishes in the organized hate which is politics…

Parts of Hard Times will make you laugh out loud, parts will make you cry, but it is all human, real, raw and authentic and backed up by real stories from history. The arguments I make are rational and based on what worked and didn’t work in history to promote the survival of the tribe.

One thing is for sure, Strong Men are needed to ensure the survival of the tribe and weak men bring nothing but pain, suffering and violence outside invaders and barbarians.

Inside this you’ll discover the secrets of discipline, freedom, adventure, and responsibility, distilling history’s wisdom into one practical and profound book.

Stefan Aarnio shatters the modern myths of science, faith, and human while feeding the mind and lifting the spirit of his readers. 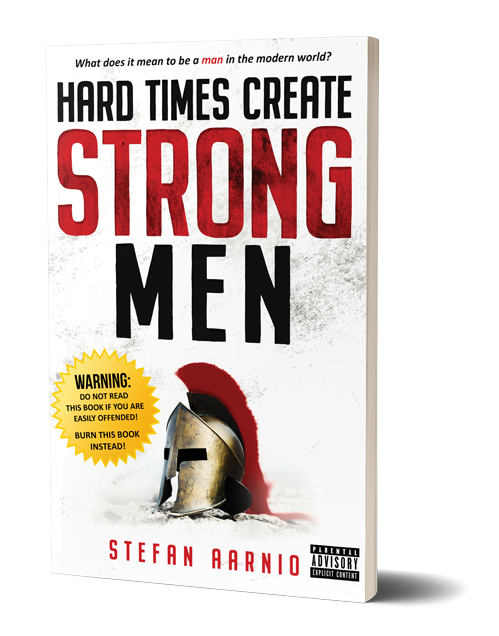 CHAPTER 10: GREAT EXPECTATIONS—WHY IT IS YOUR DUTY TO BECOME A RICH AND POWERFUL MAN

I had the pleasure of going out to dinner with a good friend of mine one night in Ottawa, Canada. My friend was a fantastic public speaker and ran a successful coaching and corporate training practice. My friend is one of the best public speakers I have ever seen, a very manly quality indeed.

In the ancient world, all men were judged on their masculinity by their ability to speak to a group of other men and their oration ability. Today we are no different. Men who speak to groups of other people are some of the highest paid people in the world.

My friend was struggling with the conflict that many men feel between putting more time in at work and spending more time with his kids and family. He had reached a degree of success and a high income, I didn’t ask him what his income was, it didn’t really matter. He felt as though he had to be around for his kids.

He loved his kids and wanted to be a good father. His assumption was that he had to be around the house all day to “be there” for his kids.

On the other hand, he told me that if he “pushed it” this year, he could make a million dollars. But he was struggling with the idea of sacrifice between a million dollars in the bank at the end of the year and his time away from his children—a noble dilemma.

I listened to his dilemma and then looked at him straight in the eye over a fancy upscale dinner and said, “You have to make the million dollars. You must.”

To the answer was clear: and let me explain my logic.

My own father failed to provide money and income for our family in the way that my mother wanted. This forced my mother into the masculine role of being the breadwinner in the home; it reversed the feminine and masculine energy in the relationship, depolarized the sexual attraction, and made my mother lose respect for my father as a man.

I got to watch my father struggle with his “business”—and I use that term loosely because he earned the same amount of money from his business for 16 years straight. His company had debt that my mother had to support and cosign for. This scared her and her middle-class conditioning—the middle class hates debt.

This displacement of power, especially economic power, and the reversal of the masculine and feminine polarity pissed my mother off. It violated her as a woman and violated my father as a man; he couldn’t play his role.