The Kids All Dream Of Makin’ It, Whatever That Means 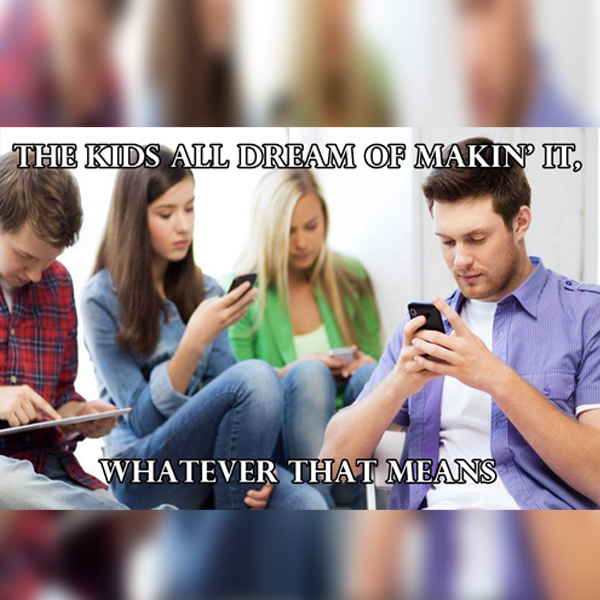 Snow White was released in 1938 by Disney, and ever since, all of the little boys and little girls have grown up with fairy tales about “happily ever after” and the “prince” that will ride in on a white horse and save us.

There is always this simple idea of being saved, or making it.

I’m convinced that the idea of heaven was created to keep the working class working until they died. Then they got to go to heaven.

In the 1930’s when pensions were being designed, the actuaries and people who designed the pension plans knew that for every year after 55, a worker would lose X number of years of life.

They calculated that if you worked until 65, you died at 67.

Pay into the pension for 45 years, live for 2, then die – and we, the employer, keeps the excess money! You made it to retirement, enjoy your gold watch and mug! You made it to heaven!

The baby boomers grew up with the idea of “someday my prince will come” and their prince did indeed come. They went to school, got good grades, enjoyed the best careers in history and the biggest economic boom time that the western world has ever seen.

But I’m not so sure if retirement, or “heaven”, or “making it” will be there for them.

The millennials, were promised a similar idea, go to school, get good grades, get a good job, and now the millennials are finding out that “making it” doesn’t really exist either…

“She saw it, and she grabbed it, and it wasn’t what it seemed
The kids all dream of making it, whatever that means” – The Arctic Monkeys

We live in a world that moves too fast nowadays.

We are seeing cars that can drive themselves, contact lenses with computers built into them, flying cars (for real this time), artificial intelligence and the biggest businesses don’t even own what they sell:

Amazon owns no merchandise, Air BNB owns no hotels, UBER owns no cars, and the list goes on and on.

The old advice of “someday my prince will come” doesn’t work anymore.

Rock bands that used to dream of “making it” are kidding themselves if they still believe that a record company will sign them into stardom.

There is no such thing as making it anymore.

So what are you supposed to do?

You need to start, you need to get going on something.

You need to focus on being great at something.

You need to become great at learning and embracing change.

Rather than waiting around for a record deal, it’s time to record that demo at home and start selling a few copies to build a small following.

Rather than going to school and getting that degree, it’s time to get a job in sales and learn to sell something other than your time.

Rather than hoping that your retirement or pension is going to be there for you, it’s time to start a business or a side hustle, or a gig that you don’t need to retire from.

The idea of “making it” has only been available to a very small minority of humans in all of history.

In all of history, people have never retired, except for the WW2 generation that won the war. Everyone else has had to work until death. After all, most generations have only lived to be no older than 45 and that was only 100 years ago!

But don’t be bummed out about this, embrace it, love it.

Find a skill, learn a craft, an art form, something you love and don’t want to stop doing.

Today he travels the world with different bands, making a living, owning a few pieces of real estate and living the dream.

But the lifestyle he lives, other people would pay over $100,000 a year to travel the world, eat great food, meet beautiful women, sleep in cool hotels, spend time on beaches and still get paid a little money to practice a labor of love.

He doesn’t have to “make it”, instead he is making it every day, piece by piece.

The small wins add up to big wins over time and if you can’t do something great, focus on doing a small thing in a great way.

Even when you win the award, make the money, grow the business to the next level, there are always the same problems:

They never go away.

My problem used to be:

There will always be time problems, money problems, fear problems and pride problems, but you have to enjoy the journey or it will be all for nothing.

Enjoy the ride, there is no finish line, the ride only stops when you die.

Instead of focusing on making it, focus on something that you can do in a great way and follow your curiosity.

Curiosity is, after all, the base ingredient for passion.