Death Of The Class Room 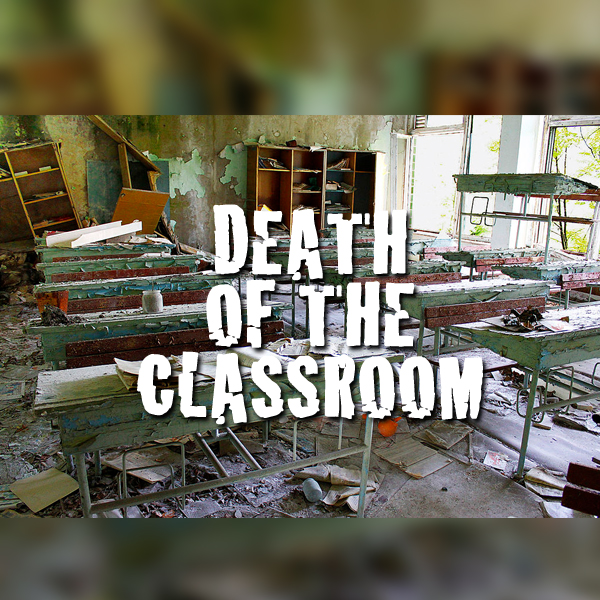 Two weeks ago I was driving to the cabin with my mother who is a school teacher and she lamented that the biggest problem in the high school today is that “Kids aren’t showing up to class”.

They have smartphones, Google, and YouTube. Why do they need to go to class?

Do they still use carbon based bubble sheets for multiple choice tests?

Of course the kids aren’t showing up to class, there is no point.

The kids know that they can look up anything online, they are busy playing games, or spending time on hobbies that they actually care about.

“Go to school and get good grades.” Say the parents of these kids.

The kids are smart and know that mom and dad don’t have the lifestyle they want.

The see music stars, sports stars, and people who are high school and university dropouts online who are “Making it” without a formal education.

Why get good grades anymore? Is anyone even checking?

In my office a week ago, we had a huge stack of resumés, people who are educated: A masters in accounting, a PHD, a few business school grads, a couple sociology degrees, engineering degrees all smart bright young people.

These people were applying for a door knocking entry level sales position in my company for $14 per hour. They should have skipped school and started knocking doors, they would have been ahead by now.

I’m hiring people with business degrees, and I dropped out of business school…

The kids are smart and know that the system is broken. Many of them want to be YouTube stars, entrepreneurs or something else exciting. They can see the money and they know where the money is.

Hint: The money isn’t in showing up to class.

The classroom is officially dead.

The classroom made sense in the industrial age where teachers were training young children to work in factories, push buttons, pull levers and be obedient workers.

The easy industrial jobs where we pushed buttons and pulled levers on the assembly line are gone forever in North America.

Today in the information and conceptual age, we have to creatively think to be valuable and there is no reason to even have a classroom anymore.

I coach and train people all over the country in the complex task of buying real estate at a discount and entrepreneurship.

Recently I held a LIVE capital raising class for 100 students who each paid $3,000 for training and should have showed up to class.

My company does not rely on the classroom for educational success, instead, we ship every student the home study class.

The student gets the media in the mail: The CD’s, the DVD’s (yes people still use those), the workbook, the binder and a strong guarantee to raise at least $100,000 for their venture (the result and guarantee of the training).

Most students get their education in the mail, and their hired coach or mentor from my company helps them through the material IN REAL LIFE.

So many students succeed by having a coach or mentor with a home study course that only 23 students out of 100 showed up to class.

Only 23% showed up, because they already got the result from self study and don’t need to show up to class.

Just like the high school kids, my adult students are smart and know that they don’t need to show up to class.

Why show up to class if you can learn from home?

Do you even need a teacher, someone who “hasn’t done it”, to stand at the front of the room and enforce your compliance anymore?

Teachers are usually people who “haven’t done it”, they haven’t done what they are trying to teach, and that style of training is worth less than ever in history. People want to learn from people with REAL experience. Real experience has real value.

For the entire recorded human history, humans have learned from a master and apprentice relational model to learning.

If you wanted to be a blacksmith, you lived and apprenticed with the blacksmith.

If you wanted to be a potter, you lived and apprenticed with the potter.

Only in the last 100 years has the idea of industrial style schools and universities existed.

The model of using classrooms to create soldiers and employees comes from Prussia to create obedient employees and soldiers. Prussia as a country has dissolved, maybe it’s time to dissolve the classroom as well?

Some other flawed ideas that have come up in the last 100 years:

1) Communism (An attempt to artificially make people economically equal – communism has not worked effectively in any country since inception, it violates human nature and becomes corrupt by nature)

2) Feminism (An attempt to artificially make men and women equal – happiness for women is down at an all time low, despite women having more power than ever before. Feminism violates human biology and inherent need and desire to start and grow a family)

These flawed ideas have been tried for the last 100 years and I’m not sure if they will survive and continue to be relevant going forward.

If the student can get the result on his own with a little bit of coaching and help from his mentor, then why bother showing up to class?

If you want to motivate a group of people, a gathering or meeting is required.

If you want to sell people on an idea, a classroom is a great place to hold a demonstration and make a sale.

As far as the real learning goes, the master/apprentice relationship style selling is back in style.

The education sector is one of the fastest growing sectors right now.

The only thing keeping the old dinosaur of traditional education alive is government protection. Without the government, traditional schools would crumble and be replaced with something that works.

The way to win in 2017 is to find something you are passionate about, get a mentor in the field and learn as humans have learned for our entire existence: With masters and apprentices.