How To Make A Living Doing What You Love 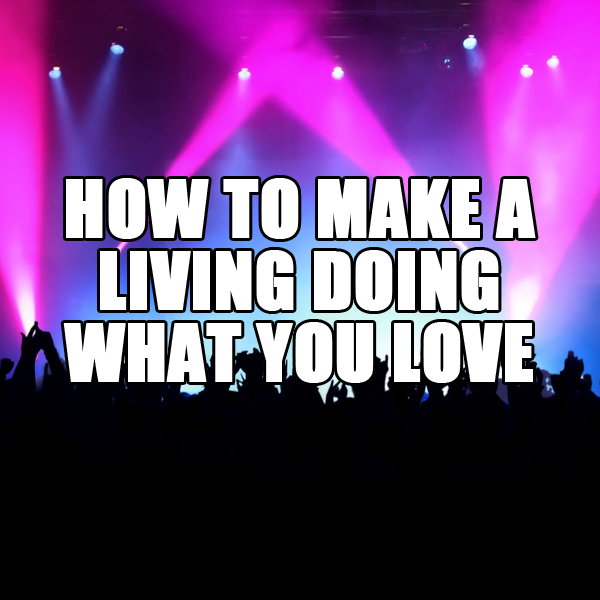 It’s 2017 and people are still trying to “make it” in the music business.

People, believe it or not, are still looking for record deals (wtf?)

Didn’t they get the memo? There are no record deals to be had these days.

Music is dead. Sure a few people are making tons of money at the top, but we don’t live in a world where you get “signed” and then you have it made.

People still make music, and the dream of getting “signed” still exists.

I used to want to be a rockstar from age 16 until 22 when I smartened up.

Music is dead and it is NOT a business.

I wanted to be a public speaker so I joined an association called CAPS – Canadian Association of Professional Speakers.

I went to their annual trade show in Toronto to see what “professional speakers” were like.

What a sad state of affairs these people were in:

Most were struggling to pay the bills. Thank god there was free food for these people.

Some of these speakers were bragging that if you “grinded it out” for long enough, you could make $100,000…

There was one speaker, who was so successful that he didn’t bother to show up to the conference. He was making $1,000,000 a year. That was as good as it gets in Canada.

Most people in that room were making less than $10,000 a year on speaking and were just fantasizing…

I felt like I was back in the music business, in a room full of dreamers all grasping for straws.

In 2015 I got paid to play some music at my friend’s father’s birthday. I had to learn over a dozen songs, had to practice, learn the words, learn the chords, perform etc. and I think I made $200 which was a great gig by music standards.

But it’s not a business.

A business has a product that is not tied to your time.

A business can spend money and acquire customers for a pre-determined price.

A business has other people doing the repetitive tasks.

A business can grow and scale.

Speaking and music have none of the above, but people still flock to the glamour of those endeavors.

The business runs on star power. It’s great to make revenue through speaking and music, but it’s not really a business. It’s just marketing FOR a business…

So where do you go if you want to speak or play music?

I have made millions from speaking, but have never made a single dollar in speaking fees. The key is to use your speaking or music to MARKET products that your business sells.

Kanye West has the right idea, so does Britney Spears. Jay-Z knows what’s up, and so does Dr. Dre – rap’s first billionaire.

You have to use your music, use your speaking as a COMMERCIAL for your products, for your real business.

Jay-Z says “I’m not a businessman, I’m a business, man!” and he sells a lifestyle. People hear the music and want the lifestyle.

If only artists, musicians and speakers could figure it out.

It’s not about the art, and I’m not sure if it ever was. Sure the art has to be good, and it’s not art until it’s sold.

Some people would say that I’m “selling out”.

To me, selling out is working at McDonalds and doing your art part time.

The people who are REALLY doing it, sell their art every day, build a business to support their habit and start a movement.

Yes you do have to sell… There is no magical record deal that will save you.

Yes you do have to sell! There Is no magical speaking gig that will save you.

You will never be “discovered’… Give up on that idea right now. Instead focus on acquiring customers, real customers with real money who support you by buying your products.

We live in a glorious age, where you can make money doing anything, and the niches are big and unlimited.

I once heard that if you had 1000 paying fans in music, you could make a living in the music business, and I believe that 100%.

But the key is customers, you must acquire customers and you have to build a business.

You have to have something to sell (think merchandise) something people want to buy and it can’t be all about you (or just the music or the art).

Go get some product, print up some T-shirts, and SELL!