What Donald Trump’s Right-Hand-Man Taught Me 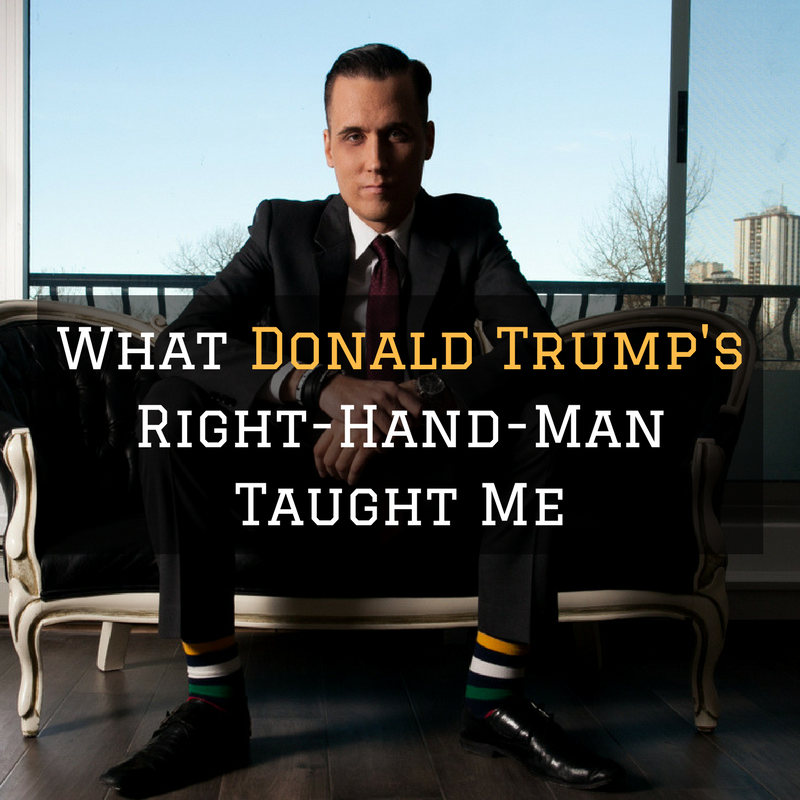 In October, 2012, I had the wonderful opportunity to spend the day with George Ross in Chicago. George Ross is Donald Trump’s lawyer, right hand man and business partner on select deals. George became famous on the hit TV show “The Apprentice” and although he has written books on negotiation, closed some of the world’s most exciting real estate deals, he is more famous for sitting in Trump’s board room than anything else.

George has been practicing law for more than 50 years and has closed more deals than any other lawyer. He has taught university courses on how to negotiate hard deals and has written two books on negotiating. With a lifetime of accomplishments behind him, George has lived a somewhat anonymous life until he fired a few “kids” on “The Apprentice”. After being featured on the Apprentice, George is famous for firing people with Trump.

George Ross has dedicated his life to negotiation, it’s a topic that has fascinated him and it is one of the most important skills required to be successful in business.

THE TOP 3 TRAITS FOR NEGOTIATION

Years ago, 150 CEO’s were contacted and were asked for the top 3 personality traits desired for the company’s best negotiators. The Top 3 desired traits were indeed very surprising:
Personality
Knowledge of human nature
Ability to organize information

Negotiation is a people game and all of the traits above are all people skills. These results surprised George when he saw them. However, when we look deeper into each trait, we can see why these traits are highly desired.

NEGOTIATION TRAIT #1: PERSONALITY – if people don’t like you, they won’t negotiate with you. Successful negotiation depends on whether or not the other side likes you. Negotiations are PEOPLE TO PEOPLE. Before the days of cell phones, Ross used to ask “can I use your telephone to make a quick call?” Once inside his opponent’s office, George would take a peek at items on their desk so he had subjects to talk about like golf, wives, mistresses, baseball etc. In one office, George saw a huge fish on the wall and Said “you must love deep sea fishing”. The man he was negotiating against said “I do!”… George said “I Love deep sea fishing too” (George knew nothing of deep sea fishing, but ran with it. )

TIP: Google a person before you engage with them so you know a little bit about them them before you try to talk deals. Try to learn as much as you can about the other side.

NEGOTIATION TRAIT #2: KNOWLEDGE OF HUMAN NATURE – People are basically predictable with what they do. Due to human nature, you can see what they do and rely on it. If you use this, you can see patterns in behaviour and predict a person’s next move.

Typical human nature: Everyone loves a “Freebee” such as “buy 2 get one free”. This tactic exploits human nature and people end up with 3 things they don’t want.

Exclusivity: Everyone wants what they can’t have. This is why “limited edition” is so effective.

Scarcity: “Last 2 items” and Time sensitive offers are extremely effective negotiation tactics: “this deal is no good after 10 days” or “70 day supply for free, just pay the shipping.” George reminded us that NOTHING IS FREE, especially in negotiation.

Another pillar of human nature is “The AURA OF AUTHENTICITY” which is the tendency people have to look at something and believe that it is true. If something is in print, people believe it to be true: “I read it in ‘The Times’ therefore it’s true”. Of course, a reporter’s opinion is just an opinion, “but if it’s printed in ‘The Times’ then IT’S TRUE”. Celebrities are often used to endorse products for “Truth”.

In retail environments, the Aura of Authenticity is often used with a tactic called “Suggested Retail Value”. Often you will see something like this in a retail store:
RETAIL VALUE $700,
today’s price $500,
you save $200,
SALE THIS WEEK ONLY $450
you think “I’m making money by making this purchase, how can they afford to sell me this item?” people are convinced that the price is real because the price is in writing. Car dealerships have the suggested retail price that is ridiculous, no one ever pays that. The brochures look so amazing and beautiful, you believe it. These are negotiation tactics that are slanted against you.

Years ago, George took a course in time management and the professor said “ALWAYS KEEP a spiral notebook and leave it on your desk, everything you do goes in that book”. George thought this idea was a “crock” until he saw a spiral bound notebook on Trump’s desk: Keep a log of daily events.

Pay attention to the 80/20 rule, 80% of your income comes from 20% of your clients. Concentrate on the 20% and forget about everything outside of the 20%. THE REST IS NOT WORTH IT.

Don’t waste time in tasks that will not create a tremendous reward.

Don’t try to grab every dollar, just get the first 20 cents, that’s where all the money is.

After spending time with George Ross, I have since purchased a few books on negotiating and am becoming a student of negotiation. Everything we do in life is negotiation and we must study negotiation to be successful in our endeavors.

George did me the honor of writing the forward to my newest book on negotiation that you can find here: http://xnegotiation.com