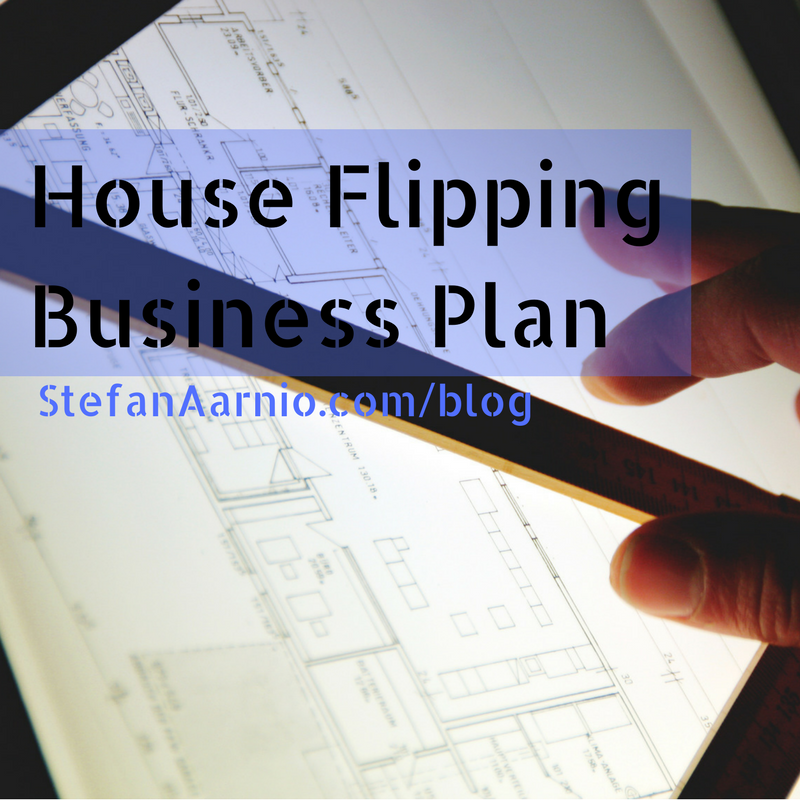 Hey guys, Stefan Aarnio here for another video. This is flipping houses business plan. We’re gonna check out the content right now, show you how to get started with a real life business plan, right here right now.

Hey it’s Stefan Aarnio with the flipping houses business plan. Now I am a full time real estate investor, been full time for years. Coming up to almost a decade. I know I’m getting a little bit old, been doing this for quite a while. Now people are always coming up to me, they’re asking me, “Stefan, how do I get into flipping houses? How do I flip houses full time? How do I be a real estate investor? How do I do this in a way that’s a real business?” Now I wanna show you one of the quickest and easiest ways to make this a full time business.

Now a full time business, the reason I’m giving you a full time business, I mean if you’re a hobby person, you’re doing one or two deals, whatever, that’s cool. It’s cool to be doing one or two deals. But I’m assuming if you’re looking for a business plan to really make this a business, I’ll show you how most people do it. So I coach people all over the country to do this for real. I have students who are doing 10 deals, 20 deals, 30 deals a year. Those are my top students. I have other students who maybe do one deal in a year or maybe they do two deals, those guys are more hobby people, and then there’s people who are professionals like myself. Now my company, we’re doing between one and two deals a week, so that’s up to 100 deals a year. That’s crazy.

And over here, this is … Let’s say this is a … I’m gonna say about a six month timeframe, here’s a 12 month timeframe. So generally, here’s the general business plan for somebody who wants to flip houses, who wants to be a full time real estate investor. For people that maybe are just starting out, maybe you are somebody who is maybe flipping one, two, three, four houses right now a year, you’re doing a couple, you’re doing it yourself, you’re doing this in a way that maybe is inefficient, maybe you’re doing some of the work, maybe you’re doing some of the general contracting. This is how you build the business now. My business has done up to about 30/40 flips a year, which is a lot of flips. That’s buying, fixing, selling properties. That’s a lot of deals, that’s crazy.

Flipping houses, the business plan looks like this. I want to see somebody do … I want a six month … I’m gonna call this the start up time. Now I coach people all the time to get started and get ready to do this kind of thing full time. It takes about six months for start up time, this is where you’re gonna set up your team. You’re gonna find your main acquisitions realtor. It’s a very special type of realtor. This is somebody who’s a pit bull, this is somebody who’s aggressive, this is somebody who isn’t afraid of rejection. They’re not afraid of making low offers, and they’re gonna make 10, 20 offers a week with you. This person, once you have this person cherish them, work with them, this person is gold. You’re probably not gonna be able to find somebody like this, you’re probably gonna have to build them.

So here we go, six month start up time, you’re gonna set up the team, you’re gonna need to get some financing. Now the way that I’ve always financed my deals is with OPM, other peoples money. So I’ve raised money from private investors, typically rich people who back my deal. These are the people who back my deals, and we go ahead and we flip houses. And what you’re also gonna need in here is you’re gonna have to get your crews, your contracting crews. Now for a business plan like this, to do a deal a month, this is gonna be our goal, which is really a starter goal for a full time investor, one deal a month. You’re gonna need a couple crews. You’re gonna need probably about two crews for that. Now a crew, just so you know, is probably a small little truck and ladder crew, it’s probably a guy and two other guys, so maybe a three guy crew. You’re gonna need maybe two of those to make this business plan happen.

So what’s gonna happen is you get the start up time going, you get the capital, there’s three parts to business. And I talk about in my book here, money, people, deal, this is called The Five Million Dollar Book now, which I wrote three parts of business, the money, the people and the deals. You’re gonna put those three things together over here. And then what we’re gonna do is we’re gonna start doing one deal a month. So it’s gonna go like this, 1, 2, 3, 4, 5, 6, 7, 8, 9, 10, 11, 12. So there’s 12 deals done in about an 18 month timeframe.

And now let’s talk about the money and let’s talk about the numbers a little bit. So when you start purchasing these deals, let’s just say that you’re flipping starter homes and they’re worth about $200,000 a piece. In a lot of markets across Canada starter homes are $200,000 a piece. Now you might say, “Oh I’m from Toronto, I’m from Vancouver, I’m from maybe even Calgary or Fort McMurray, somewhere the properties are worth a lot more.” Okay so they are, just take this and multiply it by some multiplier. I’d say in a lot of value markets, these are markets that people don’t wish to move to, a starter home is $200,000. In some of those more expensive markets maybe it’s 700, 800, 900 thousand. This business scales. So it doesn’t really matter where you are, the same thing works over and over again.

Now $240,000, that’s gonna roughly put you, if you are able to pull this off, if you’re able to do this. That’s gonna put you in the top 1% income earners in the country. You’re gonna be top 1%. If you’re somebody who maybe you’re gonna do this business plan, maybe you’re only gonna do this maybe four or five deals a year, if you’re making 100K, you’re in the top 4% of income earners. If you’re making, I think it’s 89,000 off of doing this kind of business plan, you’re in the top 5% of income earners. So you get to choose. You can have as much cake as you want. You can have as little cake as you want. That’s the beauty of living in a free country.

So some of my students are doing one deal a month. Some of my students are doing two deals a month. Some people are even doing three deals a month. If you look at my office, we’re doing somewhere around four deals to eight deals a month. And this is something that you can do, you can start doing really easy, but you gotta start out part time over here. You gotta have the start up time. The main this is you have to get educated, you might need a coach, you might need a mentor to help you. Because this kind of gap does take 18 months, it does take some time. But people do it, people do it all the time. I help people do it all the time, and when you’re making 240,000 a year, it is worth it.