The Money Wants You More Than You Want The Money 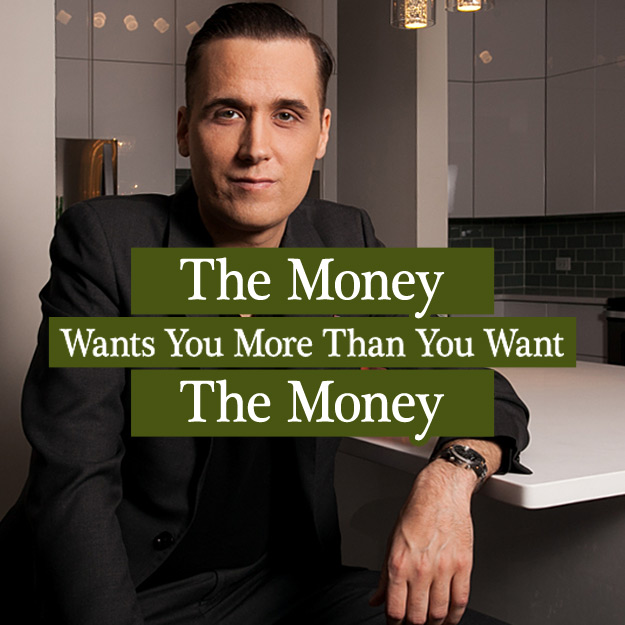 “Money is only a tool. It will take you wherever you wish, but it will not replace you as the driver.”
-Ayn Rand

Shortly after I arrived in Winnipeg, the company sent Gerry, one of the veteran vacuum salesmen to help me set up the office. I showed up at the airport early one morning to pick up Gerry as he flew in from the Canadian prairie town of Regina.

I was green, as green could get. Young and excited, bright eyed, and bushy tailed. My ambition was eager to get into the field and start selling. Gerry, by contrast, was tempered. He was weathered, like an old samurai that had seen a thousand battles or an original cowboy that had won the Wild West in another life. His skin was like leather, tanned, and wrinkled. But lovingly aged like a well-worn baseball glove that had been passed down from father to son.

Gerry had been through many battles in business and had served his time of nearly 30 years selling vacuums door to door all over North America. Gerry had done what I always wanted to do. He had proved himself as a salesman. He was a proven commodity in the art of selling.

Gerry was the closer who would come in at the end of the vacuum presentation and seal the deal. In the past, he managed a team of 4 or 5 salespeople who would go into homes and present a brand new Kirby vacuum. Gerry would stand outside on the street and wait for the salesmen to place the vacuum box outside the door indicating that the presentation was over and it was time to close. Gerry would then storm the house as the “manager” and negotiate a sale on behalf of the presenting salesmen. The method was simple, the junior salesmen would tee them up, and Gerry would knock them down.

Gerry wore a long tan overcoat, travelled light for a business traveler, and although he was old, moved swiftly and had dark intelligent eyes behind his thick blackrimmed glasses. His voice was raspy like an old blues singer who had smoked a lifetime of cigarettes, but I never saw him smoke.

I drove Gerry to the Winnipeg office and as soon as he felt the cold office air and absence of heat on his face, he slowly looked around and surveyed the dead shell of an office. He instantly knew something was wrong. “Stefan, turn up the heat in here!”

“I can’t, there’s no way I can control that from here,” I whined.

“Call the landlord—no heat? No rent! We aren’t paying a lease on a building with no heat!”

Gerry was like a four-star general that had just entered a war-zone. Within a few hours, he had the entire office up and running. Supplies were ordered, the Internet was running, the printer was working, and he called the landlord and threatened him to get the heat working by noon. Gerry was not only a master salesman, but he was also a seasoned businessman who had run many successful businesses over his life.

Gerry was an engineer by trade and the exact opposite of my fledgling salesman brain. Where I thought of sales as an art, as a musician thinks of a performance, Gerry thought in terms of cold, hard numbers. “Sales is a science.” He said.

“You have calls, conversations, appointments, and closes. You need to track and keep records of your numbers each day so you know what is working and what isn’t.”

“Every salesman at some point will start to deviate or improvise away from the proven system and that’s where the problems happen. If you keep track of your ratios: calls to conversations, conversations to appointments, and appointments to closes, you can fix your sales machine if it breaks. Eventually, you can calculate the dollars you make every time you dial the phone.”

“Why would I want to know that?” I asked.

“In sales, you need to psychologically reward yourself every time you make a call, not when you close. When you close, you are just picking up the money that you earned while dialing. Actions equal dollars, dollars don’t equal actions.”

I wrote the mantra “actions equal dollars” on a piece of paper on my desk and I still have it written down today.

With Gerry’s help, I started to actually dial the phone and call my 50 third-base leads. Although I was at the office at 10 a.m. in the morning every day, I had to wait until about 6 p.m. to make effective calls, because most of my prospects were unavailable at work.

I dialed the phone furiously and kept meticulous notes on when I called and what the outcome of the call was. I would dial the same person every day until I finally got someone on the line. When they picked up, I would run them through my script that I read like a Hollywood actor going for an Oscar. I learned from Gerry that if I was able to get to the bottom of my script, I was going to book an appointment to sell a deal. If the prospect cut me off somewhere in the middle, then I knew that the chances of booking a meeting were almost zero.

When I dialed my first phone number, an elderly man picked up. “Hello?” his voice wavered into the receiver.

“Hi Bill, this is Stefan Aarnio from Quick Street Capital calling. How are you today?” I began my script and pushed out as much energy as I could. I wanted my energy to transfer through the phone line and capture his attention.

I continued my script and explained that no one had called from the company for a while and I felt personally responsible. I had just taken over the Winnipeg office and was just making a brief customer service call to make sure everything was ok and wanted to tell him about our new offerings that were coming up in the near future.

I asked for the meeting and Bill accepted.

Two days later, Bill showed up at the office. He was in his sixties, thin, and full of life. He carried a binder and portfolio of investments under his arm and was interested in the 15% return that I had promised him over the phone from the Arizona apartment complex the company was currently selling. Bill came in for a thirty-minute meeting, but stayed for three hours as we talked through FORM: Family, Occupation, Recreation, and Money. I then took him through my scripted presentation explaining how we put Money, People, and Deals together. Bill had been investing in mutual funds and at the time, the stock market was plummeting. Bill liked my enthusiasm and my presentation. At the end of the meeting, Bill agreed to invest $10,000.

I was shocked. Was it really that easy?

My first call and my first meeting and I had already raised $10,000.

I got up from my seat and raced to the office supply room to grab the paperwork and write up the order. I had no idea how to fill out the paperwork but fumbled through it anyways. Before the meeting was over, Bill had cut me a check and I welcomed him “to the family.”

After sending Bill out of the office, I was ecstatic to show Gerry the first check that I had produced. I had raised my first $10,000 of real estate and did not even have my license to sell investments yet. The office in Edmonton couldn’t believe that I had sold a “third-base lead.” To them, those leads were dead. To me, the leads were a goldmine of untapped potential.

The entire money-raising process, although it seemed long and complicated to learn, was quite simple in reality. In the end, I learned a lesson I would never forget: the money always wants you more than you want the money.

If you’re serious about becoming a self made success you need to read this now: StefanAarnio.com/SelfmadeSpecial