Creating Wealth: The Pot of Gold Vs. The Clay Tablet Of Knowledge 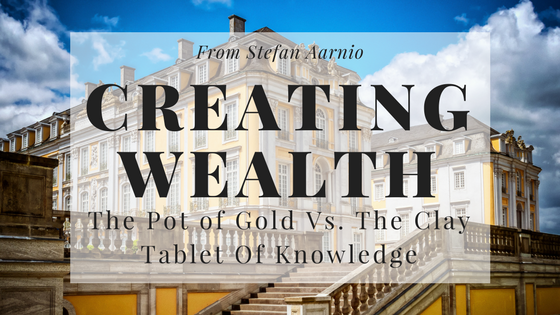 In the famous book, “the Richest man in Babylon” by George Samuel Clayson, a group of young men is presented with a choice: Which would you choose? A pot of gold today, or a clay tablet filled with great knowledge of making money.

Some men would choose to have the pot of gold today because gold today is real money and can be converted into whatever the man may wish.

Other men would choose to defer gratification and take the clay tablet, something that is worthless today but can become very valuable if used over time.

The fundamental truth when choosing the pot of gold today or the clay tablet of knowledge is the following:

Focusing on getting the gold today is not the best way to end up with the gold in the end.

Where does our money come from?

In Napoleon Hill’s Think and Grow Rich, it is very clear that man’s money comes from his mind and nowhere else.

The base knowledge, the specialized knowledge that Napoleon Hill speaks of in his book is what men may place in their mind to create gold from thin air.

Man is the only animal on the face of the planet that has no natural tools of survival. He has no fur, no claws, no sharp jaws, he is much weaker than the stronger animals in the jungle, but man has one great gift that no other animal has. He has a neo-cortex – a thinking brain.

A thinking brain, a brain that can create, visualize, look into the future, prospect, fantasize and build something out of nothing.

Man’s thinking brain has been the reason for our conquering of the elements. Man’s ability to think has been the base of our civilization and to an individual man, his wealth comes directly from his mind and his specialized knowledge.

The knowledge is the source, it is the base, it is the wellspring from which you may tap unlimited riches should you wish.

Therefore, do not chase gold unto itself, instead look for practical knowledge, specialized knowledge that you can implement to create gold at will.

Such is the counterintuitive nature of creating wealth.