Focus On What You Keep, Not What You Make 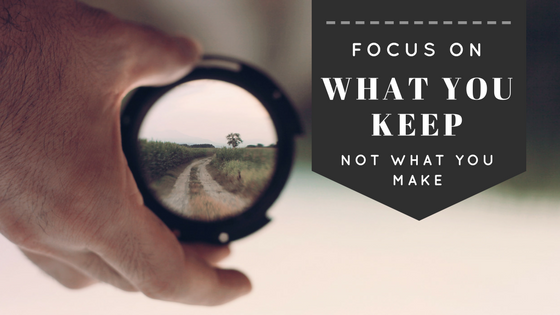 Harvard University did a study in the last century where they followed a group of men who graduated university from age 20 to age 65.

The question was, where would these men end up in life after 45 years of working?

The results were shocking:

Why was it that out of these seemingly educated men, only 1% were wealthy?

It can’t be hard work, everyone wakes up in the morning and works hard.

If hard work made you rich, then construction workers and waitresses would be the richest people on the planet.

It isn’t a high income either, high incomes have nothing to do with getting wealthy over time.

So what is it then?

You could make a million dollars a year, but if you spend $1.1M you don’t get to keep anything.

Shaquille O’Neal the legendary basketball player blew his first big check when he entered the NBA and thankfully a financial planner sat him down and showed him the power of investing and the power of compounding.

Today Shaq is one of the richest men in America owning several hundred fast food franchises, and other investments, he is worth north of $500 million dollars because he focuses on what he keeps and not what he makes.

What you keep is important when it comes to money, but there are other things you get to keep that need to be factored in as well like: knowledge, intellectual property, inventory, brand, a database, a business, an organization, key employees, real estate, goodwill, high level relationships etc.

What you make is always nice, but people who become ultra rich focus on what they get to keep.

Steve Jobs didn’t get rich on Apple, he got rich off of Disney stock that he got to keep from merging Pixar his company with Disney. Steve also got to keep the skills of growing a company from Apple and applied that to Pixar.

Facebook lets you use their service for free and sells your information to advertisers. Facebook lost millions of dollars per year while they were building the company over the last 10+ years, but what did they get to keep in return for free services? Your data. They keep your data and are worth billions and billions today over what they get to keep.

So ask yourself, in your business, in your life, in your job, what do you get to keep?

Don’t just make it money, money can be kept and turned into an investment which is great, but there are other things worth keeping too.

I always tell young people in their twenties, work to learn not to earn. Keep the knowledge and information, that will help you earn in your 30’s.

If you find that your situation today doesn’t let you keep enough, consider changing it because it’s not the things that we make that make us rich, it’s the things we get to keep.