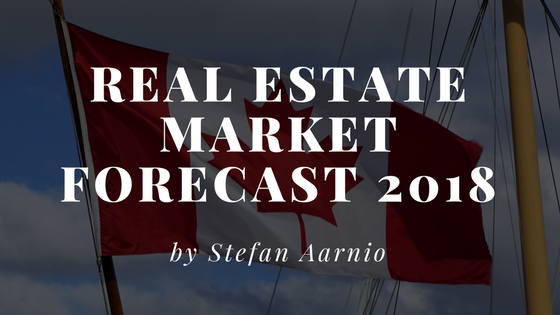 Now I was down at the bank, and it’s interesting because we’re at a time here in Canadian real estate history where the rates are at all time lows, interest rates. And because the interest rates are at all time lows, property values at an all time high. Now a couple other things to know. Canada right now just went at over 101% GDP’s of debt. We’ve got more debt in Canada than we have GDP. That just happened about a month ago. That’s bad because if you look at America right now, they have debt of 80% to GFP. Americans have less debt than Canadians. We have too much debt in Canada right now.

I think the government in 2018 is getting scared of the debt, so the banks now are stress testing.

I’ve got some people, I had one student call me recently, like two weeks ago and the bank was refinancing her at 5%. Well it wasn’t 5% for her before. She was at 3%. Now she’s at 5. The rates are going up. The banks are stress testing, so they’re making the consumers now, the mortgage, or the mortgage holders and the home buyers qualify two points higher than they’re actually at.

That would tell me that the banks would say, “Okay.” Well, there’s no way that they’re thinking that the rates are going to go up. If they think the rates are going to go up, that’s probably going to push the prices down a little bit. I said in my last 2017 market update, be careful. I think Canadian real estate right now is not green light, not red light. It’s not time to go in, but it’s not time to get out. It’s yellow light. I’m not sure.

You’ve really got to keep your eyes open and watch what’s happening because we’re going to head into 2020 pretty soon. In 2020 there is a lot of things happening around the world with China and Russia and oil and gold. China and Russia try to make their own reserve currency backed by gold. What historically has happened in the world, when a country tries to go off of American oil for dollars, which is the world policy for oil, America comes in and drops some freedom on them. Saddam Hussein in 2003 went off of the US dollar, he went on to Euros, and America was there right away blowing him up. Gaddafi, they blew him up from switching from US dollar to euros or whatever he was switching to.

A lot of these countries that are getting blown up by America right now is because they’re trying to get off this shitty American dollar that’s inflating and isn’t really real. America trades fake money for real oil and they trade fake money for real goods. China and Russia right now, this is something in 2018 that’s relevant, they’re trying to negotiate a deal where they can create their own currency trade and oil and have their own gold-backed currency. China has lots of gold. They’re in fact investing in gold. That’s what China’s all about right now, and I think that they’re trying to make a plan to get off the US dollar.

Now the good news is, here’s the great news. If things get bad, that means it’s time to buy. It’s going to turn to green light if things get bad. Some people that I’m coaching, I’m coaching some guys in Kelowna. It’s over heated over there. I said to them, “Red light, we’re not going to buy Kelowna right now,” If things are too hot I say stop. If they get really bad I say buy. Right now we’re at yellow. I’m not sure. Yellow light not sure.

That’s my market outlook in 2018. Main points: interest rates are going up, values might go down. Watch out with what China and Russia are doing. Watch out the oil. Oil’s going up a bit. Watch out for gold. See what’s happening. And if things get crazy, be prepared. It’s time to sell the real estate you don’t want, keep the stuff you want, and start stockpiling some cash and just hedging a little bit. Stefan Aarnio, respect the grind, like, share, comment, subscribe to my channel. See you on the next video.