How To Get Better At Selling On The Phone 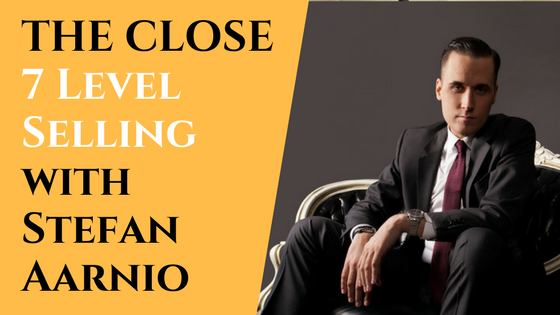 Hey guys, Stefan Aarnio with you and I’m really excited. My new book “The Close: 7 Level Selling” is coming out pretty soon. Selling has been near and dear to my heart for many years it is been my calling and my profession and my life. Ever since I was a little boy I’ve been selling, and it’s a talent of mine, I’ve loved it, I’ve studied it, I work on it all the time, and I’m very proud to bring my fourth book to the market to show people my methods and pedagogy to teach people to teach people to sell.

Now today I want to give you some tips on phone sales and again sales is a massive topic, it’s huge. There’s a couple things that I think you want to have if you’re going to be phone selling. Now let me start by saying this, the phone is where deals happen. And I don’t know if you’re taking notes or not but deals happen on the phone, they don’t happen over email, they don’t happen over text. They either happen in person with a meeting and a handshake or deals are closed over the phone.

So the phone I think is the best, well second best option, after a one-on-one meeting. That’s the best but oftentimes you can’t afford to like fly to wherever you are, wherever that person is, you can’t afford to fly there. You don’t have the time to fly there, you don’t have the time to drive, so the phone is how you sell and how you quote. The first tip I’ve got for you on phone sales is you’ve got to have a script. Scripted phone sales is the only way. Some people, they resist scripts. They say, “Oh man, I don’t like scripts, I don’t want scripts, whatever.” And I say, dude you’ve got to have script because what happens with sales people, if they don’t have a script they start saying dumb things because they either are just making it up, which is dumb. Or they start just lying, which is dumb.

And, if you get a guy on a script, if you’re on a script every word on that script is manicured and chosen to be correct. So a script is very important. And the second thing about a script is it saves your mental energy, your emotional energy and saves your improvisational energy. So you can use your improvisational in the close, your improvisational energy a little bit in the close to out maneuver somebody. But, you don’t want to be using it when you’re dialing or when you’re opening your sales. So I’m against people improvising on the phone. I think you need to have a script, and I think that the real winners in sales always have a script. If you’re in a situation, let’s say you’re one-on-one selling, you’ve got to have a memorized script, because again, when you start improvising, sales people say dumb shit. So, stop that.

Second one on the phone is your tone has to be amazing. Now in person 58% of communication is body language, 33% is tone and about 7 or 8 % is words. So when you get on the phone suddenly your tone is like 75% of the conversation, 8% is words, so you have to have a really great command of tone and all sales superstars have something in common they all sound amazing on the phone. So you need to learn to sound freaking amazing on the phone. Get your tone together, get your pacing together, you know, learn the ten types of tone that people need to influence other people. There’s about 29 types of tone, but there’s only about ten tones that people use in selling. So learn your tones, learn your tone game I got some tone game in the close for you.

The next one for phone sales is you’ve got to be, you know there’s a couple of different things with the phone, one is it’s tougher to build trust, so you might want to be able to use some off-line marketing, maybe some direct mail, maybe send them some samples in the mail, get them their physical presence somehow, because people, they don’t trust people over the phone, so you might need a marination period of the leads, you might have to really learn the sales cycle and figure out how quickly you can close a guy. If you call him, and you try to make a deal too quick, sometimes you know, that doesn’t work because they need a marination period, especially if it’s a high trust sale like financial, medical, insurance, whatever, so you’ve got to learn your sales cycle there and try to shorten that down and not sell too quick, that blows people off, and not sell too slow, which loses the sale.

And then the last tip, the fourth tip is you’ve got to learn how to sit out a close. So there’s three parts to a sale, there’s the open, then there’s the presentation and then the third part is the close. And closing is a major problem for most sales people because they start answering objections that don’t matter. So buddy says, “Oh you know my wife.” Or buddy says, “I can’t do it today.” I don’t have the money or some sort of excuse what you have to do is learn a closing process. So in my book The Close, Seven Level Selling, I give you a couple different closing sequences to nail down the proper objections, throw out the ones that are fake, and get right down to the key issues. You’ve gotta be prepared to go through several loops, several passes, on the guy on his objections because the buyers are liars and the sellers are liars and they’re never going to tell you the truth. So you’ve got to be able to work through the closing sequence, that’s where so many people fall apart. They either answer wrong objections or they give up after one or two.

So there’s my phone sales tips guys. Get a copy of The Close: 7 Level Selling. You can get it at 7levelselling.com. My name is Stefan Aarnio, respect the vine, like, share, comment, subscribe to my channel, see you on the next video.