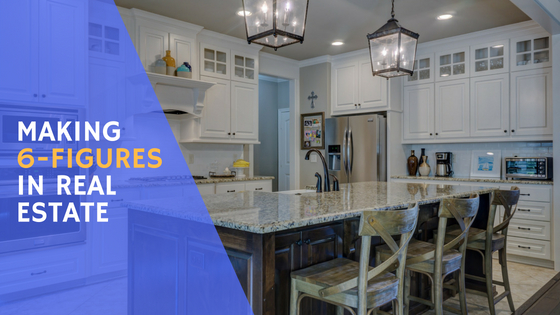 There’s always somebody who wants to know something about real estate and one thing that’s really common, one question that comes in a lot of time is, “How can I make 100 grand in real estate?” Now I work with people one on one as a coach. I also have other coaches who work for me and we coach a lot of people because there’s a lot of people who wanna make money in real estate and that’s great but it’s a simple business, it’s not an easy but it you wanna make a 100 grand real estates a great way to make 100 grand, especially with just a couple of homes. It’s pretty easy.

What’s going on here on the road? Is this one lane or is this two? Man, okay. So real estate’s a great thing because you don’t have to do a lot of actions to make a lot of money. Let me give you an example. If you go into, let’s say, house flipping, let’s say you’re in a market where the houses are worth 300 grand. I’m in Winnipeg here, average house around 300 grand. You flip a house should net about 10 points on that house. So let’s say make 30 grand a house, which is a good amount of money. Just to give you some perspective here, a house up here in Winnipeg making you 30 grand, most people in Winnipeg, in this market, make 35 grand a year. So you’re making like one year’s income for this city off of one deal. So can real estate make you rich? Absolutely. Now if you wanna make 100 grand you’ve gotta do three or four houses.

And I would say probably four is smarter because you might screw one up. That can happen. If you don’t have everything right you might screw it up, you might not make all the money you thought you were. So I think what you wanna do is make a plan, how can I buy, fix and sell four houses in a year? Now there’s some things you’re gonna need. You’re gonna need the money, the people and the deal. I’ve wrote a book about this, moneypeopledeal.com. You need the money, which you’re gonna need some investors or somebody to put the money up. You’re gonna need the people, which the team, your realtor, mortgage broker, your contractors, couple of contractors, whatever. And then you need the deal. So you need to be able to buy real estate at 40 to 60 cents on the dollar, that’s a skill you gotta learn. And that skill, you know, I have people, I gotta a guy talk to me yesterday, he called me and he said, “Tell me what the nuts and bolts are of buying real estate at 40, 60 cents on the dollar.”

I said, “Buddy, that’s a massive subject. That’s a huge topic. It’s like saying how do we go to space, you know?” There’s 17 ways that I’ve got documented to get deals at 40 to 60 cents on the dollar and it’s really comes down to your networking, marketing and negotiating. So it’s a massive topic. You can’t just talk for two minutes about it but you’ve gotta find motivated sellers. That’s the key. So you gotta get your money, your people and your deal together and if you can do it three or four times in the year. That’s the great thing about real estate, you don’t need very much activity in real estate to be able to make a lot of money. So three or four deals, that’s all you need. It’s something that you can do part time. You do this part time and you can go ahead and make a lot of money.

A three or four deal business is a part time business. Up to about six flips a year, part time. You start going past that it’s full time. And when I’m training guys, I train them so they can do that kind of business in four to eight hours a weeks so it doesn’t take very much of your time if you’re smart, if you’re educated, if you know how to do this. If you don’t know how to do this, it could take you hundreds or thousands of hours. I talk to guys every now and then who are uneducated, just flipping houses on their own, it takes 2000 man hours to flip the house so that D-U-M-B. That’s dumb. You don’t wanna be working dumb, you gotta work smart. I’m Stefan Aarnio, respect the grind. Like, share comments, subscribe to my channel. See you at the next video.