How To Find Contractors For Real Estate Rehabs 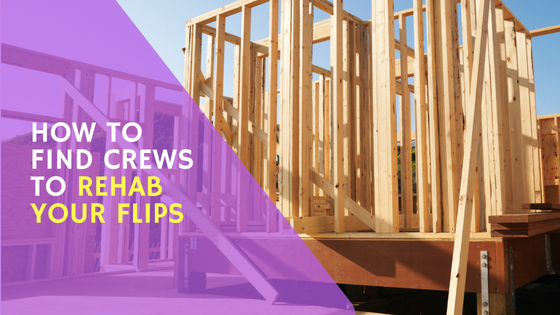 We got the guy with the list of questions, and they want to know how do you find contractors for your deals? Now, something that I’ve done very well, I got about six contracting crews that work for me, and I don’t like to work with the trades. I’d rather have a general contractor who handles the deal, because I’ve got lots of businesses. I don’t have time to be messing around in houses on my own. I guess this person isn’t moving, we’re just going to have to get another spot. So we got six GCs right now, and a lot of people are, “How do I get a contractor? How do I get a good contractor?

Getting a good contractor, let me say this is a very difficult task, and a lot of contractors are borderline criminals, and I don’t like to say that, because it seems like I’m talking negative about them, but a lot of them have personality problems, they’re borderline criminals. You got to be really careful with contractors. I’ve a lot of students and contractors are one of the number one downfalls of students who otherwise find a good deal. They find a good deal, they set everything up and then the contractor, of course, takes advantage of them.

So you got to be very careful with contractors, because like I said, they’re borderline criminals. Some of them really are criminals and some of them are borderline, so we’ve got to be careful, because they all have personality disorders, which you can manage, that’s fine. Everybody’s got a personality disorder. And the other thing is they’ve got a borderline criminal mentality a lot of these guys, so be careful, but how do you find them?

If they don’t look like a contractor I disqualify them. If they’re driving the wrong vehicle and they’re driving a Honda Civic Hatchback. Well, how is that guy going to go pick up materials in a Honda Civic Hatchback? Oh, dude, this is tight, we’re not going to use this space either. Jeez, parking in Winnipeg, man, parking in Winnipeg. That’s for a small car. So if they miss something, if they’re missing something, I don’t want to hire him.

Another thing you look at is what’s the guy’s hygiene and teeth like? If he’s missing teeth and got bad teeth, he’s probably not going to take care of your stuff either. So you got to really vet these guys, and there’s a lot of sub-verbal communication. I got lists and lists of stuff and checklist inside The System if you want to have some help on how to vet your contractors a little better.

So I’ll weed the mountain out if you interview 16 guys, 15-minutes a piece, it’s going to take you four hours on a Saturday, no big deal. But the next thing you got to do is you got to take those contractors and make them come and do a quote. So you’re probably going to end up with like four guys that are good to call and then you’re going to make them all show up at one house.

Plus, I want to know how he’s charging me, so I can figure out if he’s being fair or not. And some contractors don’t want to tell you how their structures work. I don’t want to work with them if they don’t tell me how their structure works. It’s not that I’m trying to cut them down in price, I’m just trying to understand the numbers so that we can communicate well. So those are some steps that you can use for finding contractors.

The next thing you got to do is you got to learn to manage those contractors. It’s a whole other video. Whole other topic. I’m Stefan Aarnio. I respect the grind, like, share, comment, subscribe to my channel. See on the next video.

If you’re serious about making a 6-Figure impact on your real estate investing business you should schedule a free strategy session with one of our coaches now.