POLITICS, A SYSTEM OF ORGANIZED HATE AND THE SYSTEMATIC EXTINCTION OF THE WEST 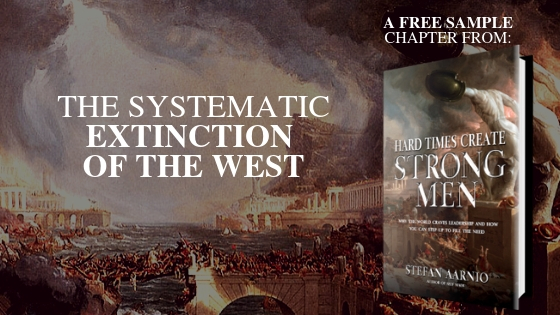 This is a sample from “Hard Times Create Strong Men” which can be found here: http://strongmenbook.com

CHAPTER 27: IN THE LAND OF THE BLIND—MEN CAN NO LONGER SEE THEIR ENEMIES

“In the land of the blind, the one-eyed man is king. In the darkness, the man with the candle is an easy target” Michael Grant

The current political climate has destroyed man’s ability to identify problems and threats in the western world. We are disabled from our tools of discernment and judgement.

To question the popular narrative of the media and government today is a political suicide mission and damning to a man and his social standing.

If a man questions why two men should want to get married, or why that is part of the popular narrative, he’s a homophobe.

If man questions why a 4-year old boy is taking hormone blockers to become a girl, he’s an ignorant, backward hick.

If a man questions why there is a cross-dressing man in the girl’s bathroom at the same time as his 8-year old daughter, he’s hateful and ignorant.

If a man questions why militant and extreme radical Muslims whom his country is in an official “holy war” and an official “war on terrorism” with are allowed to enter his country, he’s a racist, xenophobe, and islamophobe.

If a man questions why the Mexican government is dumping prisoners from jail on his borders and wishes to build wall to let the official, chosen, legal Mexican immigrants into his country and keep the unofficial and illegal people out, he’s a hater of Mexicans.

If a man questions anything to do with women and women’s roles in society, he is a sexist or misogynist.

If a man goes on a date with a woman and is too aggressive, he’s a rapist.

If a man goes on a date with a woman and he is not aggressive enough, she feels unsexy and she thinks he’s gay.

The art of thinking, logic, reason, and debate has been violently cut out of our society and anyone, specifically men, who questions any part in the popular narrative are condemned, labeled, and banished to the fringes of social relevance.

It happened to Donald Trump in his race to be president. The popular media story was that Trump was a joke. I have studied Donald Trump since 2007 (before his run for presidency in 2016) when he was famous as a real estate celebrity. He’s a self-made billionaire; nothing about him is a joke. But the media painted him as a joke because he started to call out the problems in America that were destroying and dismantling the country. When he spoke out against objective problems identified by reason, the people subjectively lashed out at him emotionally because their feelings were hurt.

These same people refused to accept him as their president, saying, “he’s not my president.” Again, this is not based in reality or reason; it’s just a feeling of him “not being my president.” I’m sorry, but he did indeed become the official president.

This is like a little child saying, “Dad I don’t want to go to bed” when dad says, “Go to bed.” That’s the level of argument happening here. The child has a feeling of not wanting to go to bed, he thinks it’s best for him. Dad knows that for his child to live a happy, healthy, and productive life, he needs to go to bed now.

Sometimes the medicine of what we need is bitter and there is no “spoonful of sugar” to make the medicine go down as Mary Poppins used to sing about in the wonderful imaginary world of Disney.

In less tolerant countries like China and Russia, those people who oppose their leader openly in such a way would be rounded up and shot. China and Russia don’t mess around; they have policies against attacking the leaders. They are concerned with their own self-preservation and growth as a tribe, and people who speak out against the leaders are punished and made examples of.

We have become so weak in America that even the tribal leader when attacked can’t fight back with anything more than a Twitter account. Men cannot question some of the political agendas unfolding in front of their eyes for fear of harsh character assassinations. Even I fear for my own well-being by exposing such problems by writing this book. Books that challenge the popular narrative are threatening and are banned like George Orwell’s 1984 or Aldous Huxley’s Brave New World. Those men told the truth, and their work was attacked for the that truth.

Politics has traditionally been about property, who gets to keep what property, and what property is redistributed to the poor. Now, politics has become a subversive force silencing the men who can defend the tribe from external attackers or invaders. As I mentioned, politics has been traditionally about property and money. Thus, if you don’t have property, you vote for the left it’s because you wish to take someone else’s property and give it to yourself. If you own property you vote for the right because you wish to defend your property and keep it for yourself. If you don’t really own much property you might be somewhere in the middle and take some of someone else’s property and give away some of your own. It’s all about power, money, property, and procurement of resources for oneself. We all vote for whatever benefits us the most.

People on the right typically live on the frontiers of survival: they run businesses, own farms, own real estate, own land, they could lose everything at any time to disaster, their own ignorance or negligence, the elements, the markets or another hostile and invisible force. For the people who live on the right side of the political spectrum, daily survival is real and practiced so they can keep their enterprises and lives running.

People on the left are protected by the state and wish for more protection. The frontiers of survival are so far away that they use their energy for pleasure, family, relaxing, or anything other than survival because the state sends them a check every month to keep the challenges of survival away.

Such is the disparity in philosophy of the left and right, the rich and the poor. America’s founders rightfully predicted that if they ran a democracy, eventually the democracy would lead to a race to the bottom, a pandering for cheap votes from the poor to win public favor and get elected into power. Politicians have been brokering weakness for power throughout history. It’s a sad trade and should be stopped, but such is human nature and such is the nature of bribes for votes.

The brokering of weakness for power happened in Rome during its demise, and the same happened in the election of Donald Trump versus Hillary Clinton.

Clinton, on the left, won the popular vote. But the electoral college—the second tier of political power—voted for Trump. Trump became president.

The founders of America were smart enough to know that the people are too stupid to govern themselves. In Rome, the general populace voted for breads and circuses and free grain for all until the barbarians sacked the gates and wiped out their civilization.

Can the popular vote be wrong? Yes, and it often is. Whatever the masses are doing or thinking, stay away and do the opposite.

“Only two things are infinite, the universe and human stupidity, and I’m not sure about the former.”

The American founders learned from ancient history from Greece and Rome and thus created America as a republic with an electoral college in place to prevent the bottom, the poor, from voting themselves free benefits out of weakness.

When it comes to voting, I have the extremely old-fashioned view that only landowners should be able to vote. At least you have a stake in the country and you own a share. If you own a share, you care about the good of the country and the group. If you don’t own anything, how can you really care about the health of the group? There is a vast amount of land to buy in the country, and cheap land in remote places. Anyone can work hard, save up, buy some land cheaply somewhere, and get a vote, but I know this old system that preserved the health of the country is never coming back in this lifetime.

America is currently practicing the race to the bottom with food stamps, free abortions, free healthcare, free or subsidized housing, and other things that were meant to be safety nets and temporarily used have now become permanent ways of life for people on the bottom to live. The only reason why we allow the bottom to live on those programs in perpetuity is because the politicians need to buy votes with weakness. This is why democracy cannot last as a permanent form of government.