5 Steps To Becoming A Millionaire 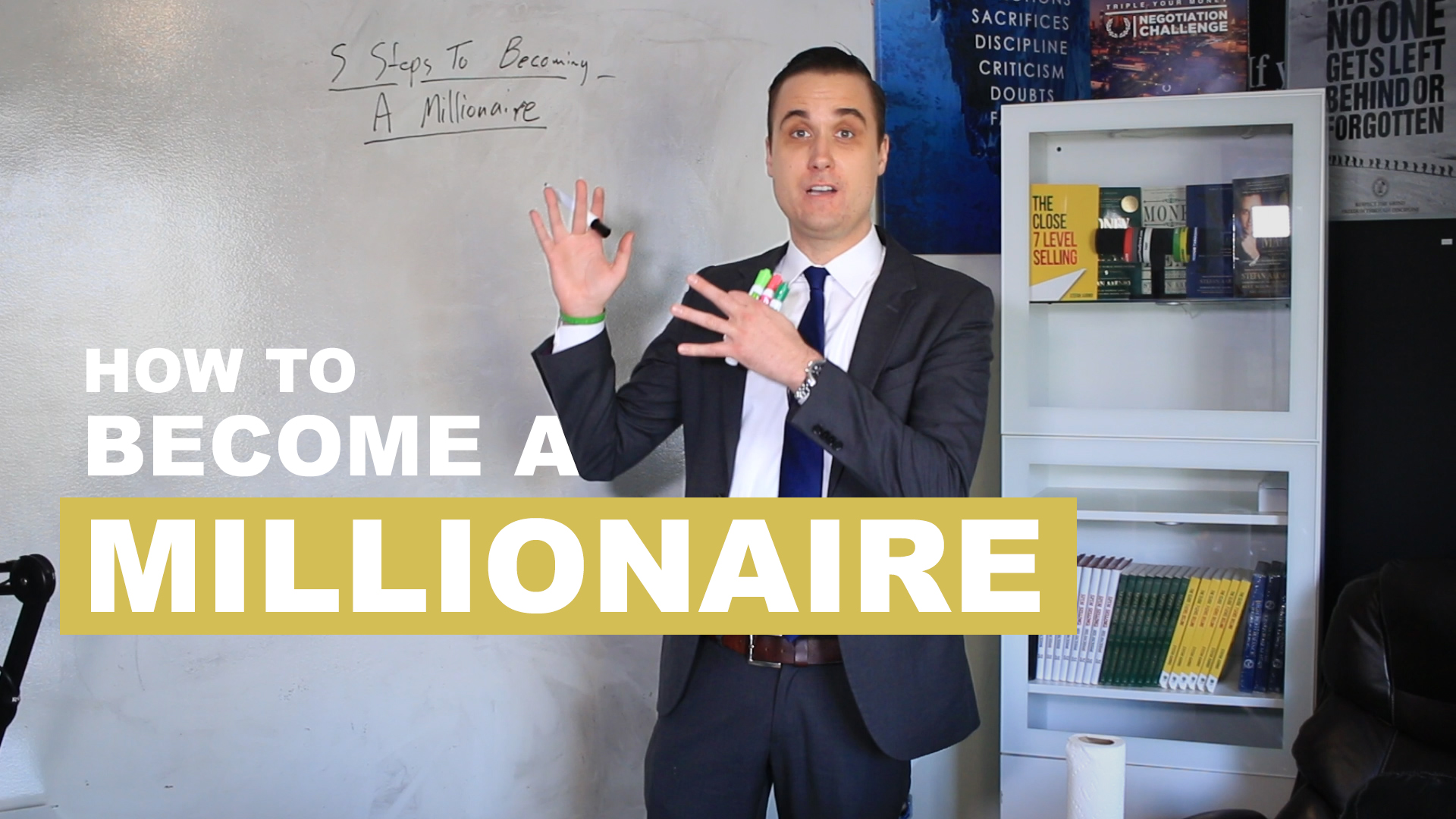 Hi, I’m Stefan Aarnio, and this video is five steps to becoming a millionaire.

Now, some of you guys might be watching this wondering how do I become a millionaire at home? Maybe you’ve got a joy, maybe you’re unemployed, maybe you’re investing. Now, I’m a guy, I started out with $1,200, became a self-made millionaire by 28 and a half. And I want to give you the five steps to do this.

So, if you’re watching this, first thing you need to know if us need to number one, get a job. You need to get a job. Now, when I wanted to be a millionaire when I was younger, when I was 16 I had a band, a rock band. I used to say, “I don’t want a job.” I thought there’s no job like no job. But if you say I don’t want a job, you’re just going to be employed and broke. You don’t want to be broke. So, you have to start out with a job.

Now, what kind of job? At the beginning, it doesn’t matter. Just get a job. You need to start getting some dollars per hour. So you could be doing anything, cleaning toilets, working at Mcdonalds, maybe answering phones. Anything, you just have to get some money to start.

Now, the second thing is once you’ve got a job, now you’ve got to start looking for a sales job. So, you’re going to do this job for some amount of time until you get good at it, you’re making money. And then once you’re making money, now you want to go into a job where you start working and making dollars per day. So, now you’re a commission person. You’re learning how to sell. This is the number one skill of the rich, and the millionaire people out there. You’ve got sales is the number one skill. If you want to be rich, you have to learn how to sell.

So many people say, “Oh, Stefan, I want to get rich, but I don’t want to sell. I don’t want to sell anything. I don’t want to ask people for money.” That comes from limiting beliefs, and if you have limiting beliefs around money, and if you’re negative about selling, you will never ever become a millionaire. I shouldn’t say never ever, you could get there maybe when you’re 50, 60, just keep investing and just keep saving your money. But there’s the thing guys, in the modern world today, you can’t save your way to being a millionaire anymore, it’s not really a great thing to do.

But this guy, the top 1% guy, is the same guy throughout. So, go get your sales job. Then once you’ve got your sales job, step three here is we’re going to start or buy a business. This is where you start making more than 100 grand, 100, 200, 300 thousand. And this is where we start getting some leverage. So, what ends up happening now, you’ve earned the right, you’ve got the job, you’ve proved you can work. Then you’ve proved you can sell. Once you make that 100 grand, you go start a business.

Now, if you make 100 grand, you can invest that in a business, buy a business, start a business, which leads you to step four. Now, step four, you’re going to start investing your cash. So what happens is over here we’re focusing on this is earned income. So, first you’ve got to earn it, then you have to grow it. So, now you’re keeping it, and you’re growing it.

Then you get to step five. Step five is where things get really fun, you sell the business one day. I had a friend I was hanging out with, and his father is a billionaire in China. And he said the only reason why you build a business is to sell it. So, you build the business, one day you can sell it. And this is where you become RFR, really fucking rich.

So, that’s what you want. Sell the business at the end, become really fucking rich, and you become an investor. So, if you like this kind of thing, if you like the plan, I want you to leave me a comment, or a question below. I’m going to answer that. And you know what? There’s actually another step here, I’m going to put it over here. Maybe we’ll put step zero up here. You want to go and get a copy of this book, Self Made. This is how I did it, how I started with 1,200 bucks, and became a self-made millionaire by 28 and a half.

So, this is following me going through some of these steps here. Meeting my mentor and learning how to do this for real. So, if you go on the link below, you’re going to get a $1.99 audiobook copy, so you’ve got no excuses. I’ll read the book to you. Even if you can’t read, you can’t do it, I’m still going to get this book done for you. I’m Stefan Aarnio, like, share, comment, subscribe to my channel. I’ll see you on the next video.