LIVE AS A BRAND OR DIE A COMMODITY 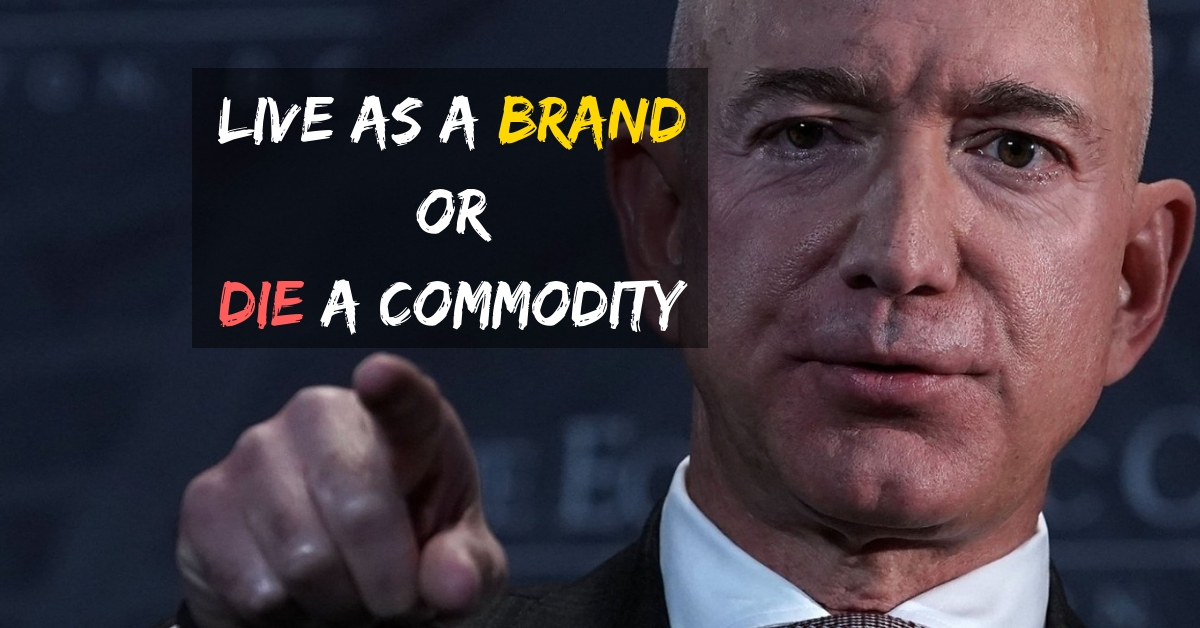 In the dark ages, peasants farmed the land for their lords and their king. If you were a peasant, you were tied to a small plot of land where you grew your crops and you gave a share to the lord for protection. Every day you worked your land, put in your labor, paid your share to the lord – the land owner. Once in a while, a band of Vikings or raiders would sweep across the land – killing, raping and pillaging. If you were a peasant you had to run inside the walls of the castle for protection from the raiding bandits or you would die by the sword.

The walls of the keep, the castle, would offer you protection. The walls, the moat, the drawbridge, the gates. When you were inside the castle walls, you were safe, protected by a militia against the raiders that would kill you, enslave your family, burn your house down and raid your crops and livestock. They would steal your way of life.

It’s human nature, the strong have always taken advantage of the weak.

So what could you do?

You and the other peasants would take up arms and form a militia, to fight back against the raiding bands of Vikings. The most famous Viking from the dark ages was Ragnar Lothbrok who was the first Viking to sail west into England. He was famous and feared for raiding England, France and even into the Mediterranean. Everyone feared Ragnar. Vikings, like Ragnar were so dangerous and fearsome because you never knew where they were going to strike next. They had technologically advanced ships and navigation systems so they would appear out of nowhere from the water, men of the sea to rape, pillage, plunder and kill and then disappear just as fast…

By the time they showed up on your shores it was too late, you were unprepared, they took what they wanted, and you and your family were dead.

To fight off the Vikings, you had to build a wall, a defense, a moat. Something to stop the Vikings to slow them down enough so you could retaliate. Otherwise, everything in your way of life would be lost and you would be killed or enslaved, the strong always taking the weak.

Nearly 1000 years later and the human race hasn’t changed much:

Enter the age of the internet, we are not that different from the dark age of the Vikings.

You, the business owner work your small piece of land, your business and pay a portion of your production in taxes to the lord, the king – the government. Life is good and you can survive most of the time, but life as a business owner is hard. You have a 90% chance of failure in the first five years and if you survive, a 90% chance of failure in the second five years. Living the life as an entrepreneur working the soil of your business is a dangerous and risky job – much like being a peasant working on a farm in the middle ages.

Your business, your farm, could be wiped out at any time from plague, pestilence, drought, too much rain, frost or any other amount of natural problems. But worse, there still are invisible Viking raiders in the modern world too.

Bezos has smashed and destroyed his competitors all across the world. He has wiped them out, cut off their limbs and put their severed heads on sticks all around his camp. He has destroyed or assimilated his competitors with the magic of “one button shopping”. He is the richest man in the world today and his company has never made a profit. Amazon sells everything from A to Z and he will gut every last penny of profit out of your business because in the internet age you must:

In the new world, it’s: Live as a brand or die a commodity.

Amazon and the internet age are here upon us and like a band of blood thirsty Vikings, anything that is not protected by a brand will be lost to these raiders.

Warren Buffet, world’s richest investor says “build a moat” around your business and walls of your castle. Fortify your competitive advantage and in the age of Amazon, the age of the internet, the age of commodities, where everyone and everything is being forced into a commodity at lighting speed the ONLY way to stay alive and thrive is to:

Your brand is the last competitive advantage that you have in this world. Bezos can never take it away from you!

These 5 companies are owned by Buffet along with many more that are protected by moats, walls, soldiers and cannot be raided by Bezos.

In the late 90’s and early 2000’s people feared small businesses getting raided by the giant Wal-Mart, but Wal-Mart’s days are numbered. Jeff Bezos knows this and so does Warren Buffet, a former owner of Wal-Mart stock…

In 2016 Warren Buffet sold 90% of his Wal-Mart stock as Amazon and Jeff Bezos began to smash and destroy Wal-Mart’s competitive advantage in the market place – the lowest prices guaranteed.

Competing on price alone and having the lowest prices in the market is no longer competitive in the age of Amazon. Amazon waged full on war with Wal-Mart, Wal-Mart launched a counter offensive to Amazon called “Walmart.com” and it failed. Wal-Mart learned a painful lesson “you can’t out-Amazon Amazon”. Buffet saw Amazon win and he sold his Wal-Mart stock retreating from the Viking hordes of Amazon that had broken through Wal-Mart’s defences.

How long does Wal-Mart have to live? The oracle of Omaha, Warren Buffet, the man who can see the future has sold his position and given his ground to Jeff Bezos. Bezos, the raider of Amazon has pierced the impenetrable walls of the former world champion – Walmart.

From this point forward, it’s only a matter of time…

Bezos will get what he wants, he’s the world’s richest man, and he will get richer in his raid on Wal-Mart and attack on commodity pricing.

Walmart was the ultimate dealer of commodities, selling anything and everything at the lowest prices possible. They would enter a small American town, eliminate the small mom and pop shops by driving down prices of everything to commodity status and once the mom and pops were out of business, the employees of Wal-Mart would cheer in their morning meetings. Another competitor dead, another peasant raided! Once all the local competitors were wiped out, they would close the local Walmart store and relocate to a more profitable location. The local customers would no longer have a local Wal Mart and would have to drive further to the new and bigger store. Sam Walton raided mid-west America and became filthy rich raiding small towns for years with his commodity driven price strategy –it worked!

Warren Buffet knew this, he saw the competitive advantage of Wal-Mart driven by low prices and he invested big.

But a new raider is here – Jeff Bezos and the internet. The internet is too efficient – “free shipping” on everything, everything delivered to your door. “One click shopping”, Amazon truly is “the everything store”. Bezos recently bought Whole Foods in the United States and Amazon has a real estate foothold now. When they can find a way to deliver everything to your door, same day delivery, for the lowest prices possible, one click shopping, Walmart will be finished – game over, check mate. It’s only a matter of time before Wal Mart out completely like Sears, Toys’R’Us, Blockbuster, Kodak and other companies that fell in the age of the internet.

No one can compete on price anymore!

What does this mean for you?

If you want to survive the raids of Bezos and the attacks that are to come in the future, faster and undetectable like the Vikings ships in the middle ages. You need to build a wall, build a moat and get your defenses ready.

Your wall, your moat is your brand.

You must build your brand, your competitive advantage that Bezos can never take away from you and

Live as a Brand or die a commodity.

So how can you build something that the world’s richest man, the 500 pound gorilla of the world can’t take from your hands. How can you be protected against the bully on the school yard?

There is one thing that Bezos in his commodity driven, price killing machine can never replicate that only you have – The brand experience!

Bezos, and the Amazon experience is a commodity driven experience, competing on price and easy to use one click shopping. There is no magic in what they do, it’s just fast, low price, one click, easy-peasy.

Do they offer a romantic, exiting, experience? No!

Plus, they never can!

Their skill is to own and control the commodity market, special, brand protected experiences: Coca Cola, Snickers, McDonalds, Apple, Heinz Ketchup can never be raided by Amazon. Buffet knows this, and it has made him the world’s richest investor.

What’s more important; The business or the brand?

They are one and the same!

If Amazon came out with a Amazon-Cola, they would have an uphill battle fighting Coca-Cola. Richard Branson, the billionaire, tried to go head to head with Coca-Cola with “virgin Coke” and he got destroyed. The legendary Brand of Coke was protected against Branson’s attack on the market.

If Amazon tried to re-invent the Snickers bar, they would go nowhere. Snickers is an intimate experience inside your mouth. You won’t take the risk with a foreign chocolate bar even if it’s cheaper.

Heinz ketchup vs. no name? no way!

If you are an Apple user, and hooked on the apple experience, you will never go back to the generic PC experience.

The moat is there, the walls are there, the experience is there – The BRAND is there.

Bezos, Amazon, the raiders, the Vikings, looking to take your life, take your profit and take your business can never get you if you have the protection of a brand; because we live in the age where you will:

Live as a brand or die a commodity!