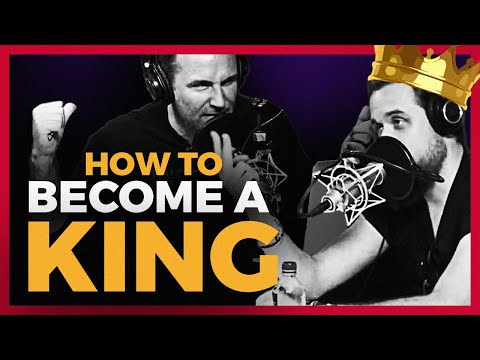 Brad Lea is an influential entrepreneur, sales expert, and motivational speaker. He’s the founder of Lightspeed TV, Author of The Real Deal and host of the dropping bombs podcast.

Brad recently invited Stefan Aarnio, Author of the “Hard Times Create Strong Men” series on to his podcast to speak candidly about business, religion, and philosophy.

The two entrepreneurs agreed on many of the topics discussed, and Brad Lea even went so far as to state that he will pay his sons to read Stefan’s book “Hard Times Create Strong Men.”

Multiple *bombs* were dropped on this podcast. Among them were how to live your life’s purpose as a man. What makes a man a king? And the meaning of life and Ego death.

In fact, Stefan went into detail about his raw enlightenment experience during his time in the Mexican Jungle as he struggled to overcome cancer.

After embarking on a 40-day water fast following his cancer diagnosis and rejection of radiation treatment, Stefan experienced what he now calls “Ego Death.”

If you are of the religious type, you may be familiar with a similar experience taken on by Jesus Christ, in which he also subjected himself to 40 days without food in the desert.

Stefan’s experience was spiritual in nature. And he speaks of a specific experience, 3 days after completing the fast in which he was still unable to regain his strength even after consuming food again.

During this deeply hollow and lonely experience, Stefan realized he must put his womanizing days behind him, and as he walked through the jungle that night to his hut, he fell through mental trapdoor after mental trapdoor, going deeper and deeper into panic and despair.

Later that night he faces off with his own demons in the pitch dark blackness of the jungle, realizing his own faults and overcoming his own ego.

After this harrowing experience, things immediately started clicking for Stefan. His business took off, his cancer was defeated and he found himself enlightened from his old ways.

Head to the link below to learn the entire story and hear the full podcast with Brad Lea and Stefan Aarnio.