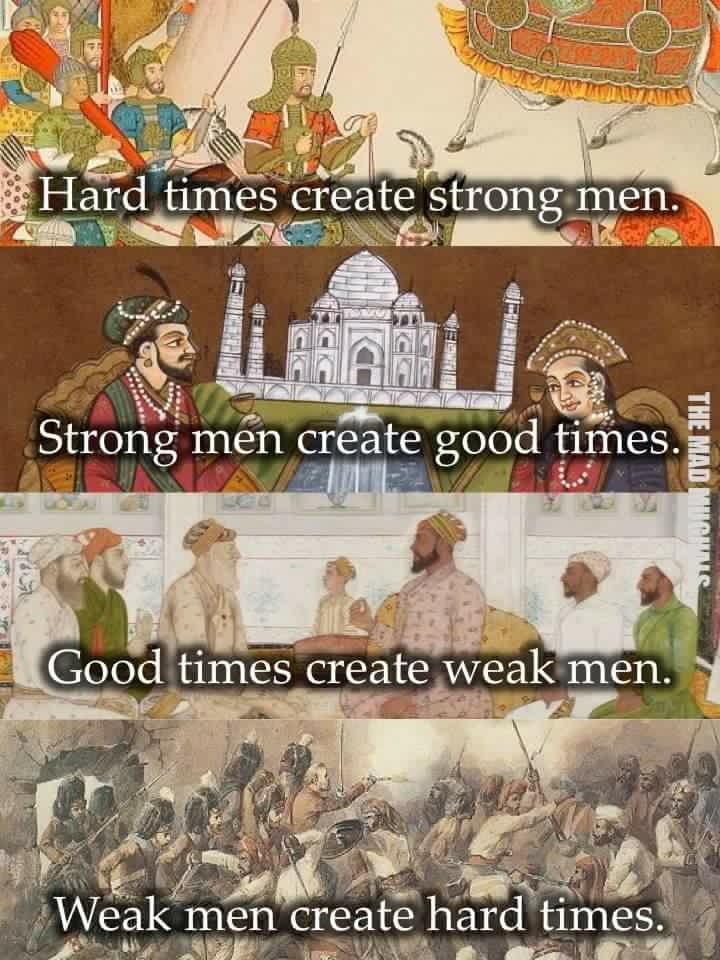 Today I read a short poem online, it read:

The poem struck me as I read it.

The circle of life, what goes up, must come down.

Unfortunately, in November 2016, I believe that we are in the “weak men create hard times” part of the cycle.

Strength and success are born out of stoic values.

To have wisdom, justice, courage and moderation is to be strong where one will defer his or her own happiness and pleasure for virtue.

To the stoics, virtue was more important than happiness in life.

In contrast Epicurean values stem from Epicurus and he believed:

that what he called “pleasure” was the greatest good, but that the way to attain such pleasure was to live modestly, to gain knowledge of the workings of the world, and to limit one’s desires. This would lead one to attain a state of tranquility (ataraxia) and freedom from fear as well as an absence of bodily pain (aponia). The combination of these two states constitutes happiness in its highest form… Epicureanism is a form of hedonism – Source Wikipedia

As a millenial, I can say that my generation is certainly Epicurean in nature. We are indeed living in a time of weak men who create hard times.

Today’s young man between 20-30 is drowning in pleasure through video games and pornography, he will not have a serious or real relationship with a woman to make a family or bear children until late in life or perhaps ever. Our birth rates are down and costs of living are high, so traditional families are in decline. His personal happiness comes first above all else. He has limited desire and ambition and in effect, must live modestly. He is the most educated that a young man has ever been in history with little action taken to use his education to to reach his potential in life. He has an absense of bodily pain and we now have “safe spaces” and “cry spaces” on campuses to validate our generation’s weak emotional fortitude.

We are living in a time of weak men.

If you’re serious about defeating weakness and developing a modern warrior spirit then this book is a must-read: http://strongmenbook.com/

In 2016 a strong leader like Donald Trump gets elected in response to a prolonged time of weakness and weak men and people cry in the streets and protest.

Weakness has taken over.

My grandmother’s generation (born in 1920’s) lived through the great depression when she was 10, fought in world war II when she was 20, build a house and a family by 30 and went on to be one of the most successful, virtuous, happy and wealthy generations in history.

18-year-old men used to storm the beaches of Normandy on D-Day in World War II with bullets flying past their faces in the name of service and freedom to their families while today’s 18 year olds need “cry spaces” because their feelings are hurt.

Where did all the strong men go?

I’m not saying all millenials are weak. To be weak is to choose to be weak. There are strong millenials out there who go against the grain and work harder than ever to ignore the pleasures and distractions of such a weak generation.

You determine your level of strength and your own level of greatness.

I am sad to say that we live in a time of weak men and we will plunge into a very dark, very hard time ahead of us.

This dark time of hardship will galvanize men and women to become strong, like my grandmother became living through the depression and World War II, while other weak men and women won’t make it.

Strength is a choice, greatness is a choice, do not be tempted by pleasure and the distractions of weak men and women.

If you want to be strong, it is time to rise up, this is your time to seize everything you have ever wanted. Such rampant weakness has created a huge gap in the market for you to fill, but it can only be filled by strength.

P.S. If you’re serious about destroying your inner juvenile and leaving a legacy instead, try this book: http://strongmenbook.com/

You can read free sample chapters below:

The Extinction of The West

Genocide of The Middle Class